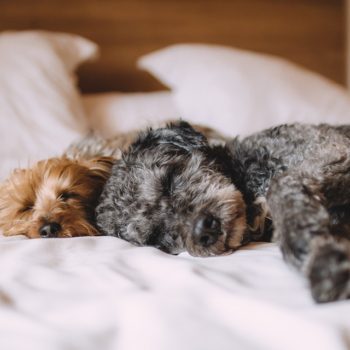 Just like their owners, dogs can feel stressed at times. For some it’s just temporary and they calm down very quickly. Others tend to stay in that aroused zone longer. In some cases the dog is simply wired and can’t seem to find their place long enough to settle. There’s a heightened sense of worry and even panic. There can be repercussion to health and in some cases the dog ends up at a shelter.

Monica’s dog was one of the shelter cases. Calming him was a must and a positive reinforcement trainer was the first important step.

The products below helped Hudson calm down.

Spraying this in the car, in a room that’s new to the dog (at the vet clinic!), a room the dog isn’t pleased with (bath time?) can help.

We used this in just one room to try and distinguish between what Hudson’s reaction to it was and what we hoped it would be. The fact that he chose to be in that room whenever he seemed to be going over threshold made it clear. He would lie down as close to the product as he could. We placed his bed there to keep him comfortable.

Once the bottle above ran out it became clear we needed more. This is what we ordered and would have kept ordering (Hudson’s reaction was that good) forever if we had to. As it turned out, this three-pack was what we ordered twice. Then everything seemed calmer and we no longer needed to order. Some dogs might need it on for a longer period of time. It’s all about what works for your own pup.

a bit woo, or a marketing tactic but it’s been proven to work in clinical settings. When a vet clinic has numerous stressed out dogs being kenneled after procedures and those dogs show more calm when this music is played – ok, we were sold enough to try it. Guess what? It worked!

Once people knew the music above really helped we were gifted a few more. They’re not all created equal! The one below was as interesting addition because it worked best when Hudson was left alone with a young pet sitter. Dogs! Go figure.

Regular crates may be fine for most dogs, but they may cause concern and suspicion if the dog doesn’t like to be confined. Not all products work for all dogs, and it took some time for us to understand what Hudson would find soothing rather than confining. This portable crate worked for him. Maybe because he can see out the sides – who knows? Can we zip it up and carry him around in it? No. Does he choose to lie inside it after having zoomies to the point where he’s a bit out of control? Yes! Choosing it as a calming place all by himself tells the story. This is not a safe crate to leave an anxious dog alone in, but has worked well as an option for a calming place while being supervised.

Thundershirts have been shown to work. Tested by Temple Grandin, vets, you name it. It’s incredible how well they work for most (not all) dogs. Not unlike wrapping an infant, they seem to bring some security and comfort even though, to be honest, they don’t look all that comfortable to me. Hudson responded well to it when he seemed stressed, and even acted more calm during thunderstorms. It’s not magical for him, but does provide one more layer of calm for a dog that could use all the layers he can get- ha

Bach Flower Remedies have been around for a long time. Some of our clients swear by Rescue Remedy for dogs than need to calm down in certain situations. Feedback on the product are mostly great. Monica’s experience suggests it depends on the dog, but it’s certainly worth trying. While it didn’t help Hudson or Zoey, it was fantastic for Cassie who was terrified of windstorms. Yep – wind. You can’t make this stuff up. This remedy is specifically for pets and contains no alcohol.

Sometimes fearful dogs are also overly sensitive to noises. Thunderstorms and fireworks are givens, but even the garbage pick up truck or next door neighbor’s garage door opening can be a trigger. As the day goes on and these triggers start to stack until the dog is on overload it becomes even harder to get them to calm. Puzzle games can help dogs gain confidence, but we also use them to try and change the way Hudson feels about some things he’s afraid of. Thunderstorms mean at least one puzzle will be offered. Eventually, storms can be predictors of good things to come rather than scary. We show food puzzles that have worked on this page.

We are not affiliated with any company, but may receive a very small referral fee from Amazon which helps to support this blog. Thank you so much for your support!