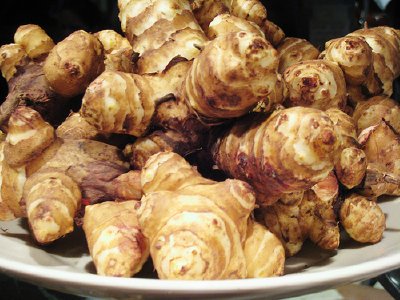 Both are said to be good stuff, and heaven knows we can find them added to all kinds of foods (especially in dairy products) and supplements these days – but what the heck are they? And are they really good, or just another sales pitch being thrown our way? A bit of both, actually. I wrote a brief post about this a while back, but if my in-box is to be believed, expanding on the information is of interest to an awful lot of folks; not just for their dogs, but for themselves.

Inulin and fructo-oligosaccharides (not quite the same, but used interchangeably) aka FOS are basically nothing more than carbohydrates belonging to a class of compounds known as fructans.

Think of them as a sugar that passes through the digestive tract intact until it reaches the colon. At that point, the good bacteria in the colon uses them as food. Because of this, they’re referred to as PREbiotics. They’re used as food for PRObiotics (think acidophilus, bifidus, etc.), so they’re supposed to help the good-guy bacteria to flourish.

On the upside, inulin and FOS studies have shown enhanced immune response, and better nutrient absorption with the addition of prebiotics to the diet. You can find a number of the studies here. Because we can consider them to be fertilizer for the good-guy bacteria in the bowel, much advertising has been done to promote the concept.

Labels may state Inulin or FOS with a source beside them, but you might also see them listed by names such as Diabetic Sugar, Dahlin, Neosugar, Alantin, Helenin Alant Starch, and Atlanta Starch. It’s really low on the glycemic index and has a slightly sweet taste.

Bifidobacteria (normal resident in the gut) digest inulin to produce short chain fatty-acids. The butyric acid, for example, has anti-cancer properties in the intestine. Others, like propionic and acetic acid can be used for energy production by the liver.

So far, so good, right? Who could argue about the addition of inulin/FOS to foods? I could, and I’m pretty sure I’m not alone. The downside to these additions is that they’re not whole foods, and while I don’t have anything against supplements that serve a purpose, there are some things that make me pause. For instance, the best sources of inulin/FOS are chicory and Jerusalem artichoke.

Both provide fiber as well as inulin/FOS, and that’s why they can be magical for some dogs and people. They’re balanced foods in so far as their properties go, whereas inulin/FOS alone has led to horrific constipation in more cases than I can count. It seems that there’s a threshold dependant on  the sensitivity of the gut, but unfortunately, nobody knows what the bacterial population of dogs and people was to begin with when the supplements were fed. I suppose that has a lot to do with it, but fecal impactions are too serious and painful to let me do much guessing.  Best bet: use whole foods as a source of FOS. Supplement with acidophilus as can benefit a dog or person, but think twice about products that have added inulin/FOS.