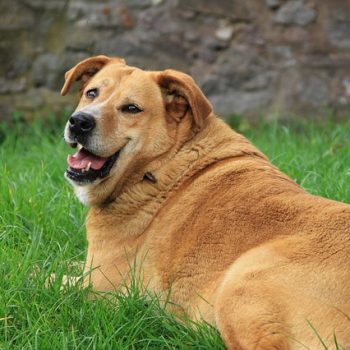 I’m talking to you. Yes, you! The one with the Cavalier King Charles Spaniel that’s “just big boned”, the owner of that Mastiff who is “supposed to be this large!”, the Beagle devotee who loves the “plushy rolls that are part of being a  hound”, and every other dog owner out there who’s looking at their dog through the fun-house mirror that makes their dog look thin. This is for people who think their vet just likes skinny dogs too.

There is not a plot underfoot. Nobody wants your dog to be too thin. In fact, I’ve argued for adding a few pounds to a scrawny frame. But, as someone who works with dogs and diets to address pretty much everything under the sun, I see more fat dogs being defended for being overweight than is remotely reasonable. Sometimes it makes me smile because let’s face it – your dog doesn’t need to be defended. Unless that dog feeds him/herself, you’re defending your own actions. Telling me that the dog just loves to eat and the humans in the family love to feed her is nice chit-chat, but it doesn’t help the dog. She is going to pay (big-time!) for it. Her life will be shortened (studies bear this out), overall health will be in jeopardy, skeletal problems can crop up, the heart is being forced to work harder, pancreatitis becomes far more likely…this is not a good road to be taking your dog down on. Reverse course!

To be sure, there are Cavaliers who don’t meet the standard i.e. they may be larger overall, and the same can be said for any and all dogs. Those with a thick coat can look heavier than they really are, etc. However, it’s time to put away the excuses. You know that a dog should have a waist, and that you should be able to feel the ribs easily (easily! – not by pressing deep into the blubber) when you stand over the dog and run your hands down his sides. Clearly, something is wrong if you know your dog is overweight (even worse if you don’t know it – please ask your vet to provide feedback, not only about weight, but the possibility of a health issue such as hypothyroidism) and seems unable to lose the extra pounds (or ounces if you own a tiny breed)

Your dog’s nutrient requirements are based on his/her ideal weight. So, those requirements remain the same even though you need to feed less food, but less food = fewer nutrients being fed. It’s a balancing act. Feed fewer treats with less caloric density (a baby carrot rather than baked goods, or meats), in smaller sizes. Reduce overall calories per day by choosing leaner meats and/or raw meaty bones (RMBs) if you feed a raw diet. For instance, skinless turkey neck provides a whopping amount of calcium within much fewer calories than just about any other RMB. If feeding a commercial diet, don’t be fooled by claims of “grain free” products. Not including grain doesn’t mean the food is slimming. Most are loaded with dietary fat meaning the calories are packed within smaller amounts of food. In other words, you might need to feed less food to provide X number of calories as compared to another formulation. The glitch is that with less food, your dog can be really hungry. You’re unlikely to lose weight if you walk around hungry all the time, and the same is true for your dog. The begging and whining is going to get to you sooner or later.

Your dog is relying on you. Help him/her to live better and live longer. Get weight under control!