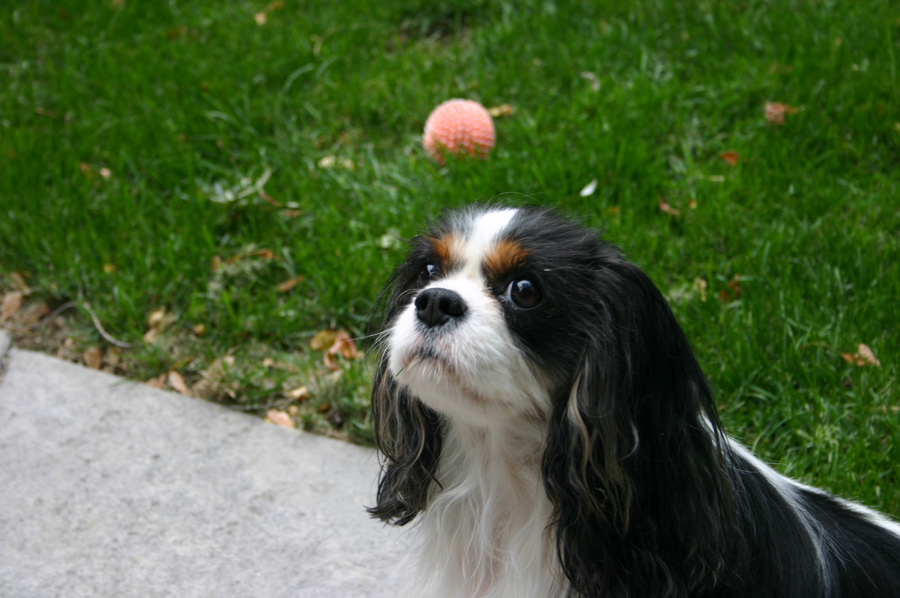 There are times when medications can’t be avoided. In fact, sometimes they must be for life, and it’s these situations that tend to bring the toughest side effects to deal with. But! – dietary manipulation can go a long way to helping the body cope better, and even reduce the risks. Let me use our dog, Tori, as an example. I have a love-hate relationship with Prednisone because it’s saved her life, but it certainly has side effects.

Tori started showing odd signs when she was about ten weeks old. I’d call her, and she’d turn her head in the opposite direction. She could hear well in that no sound escaped her, but her response was strange.

By the time she was four months old she started to walk with her head tilted to one side, and this was followed by shaking her head repeatedly.

An ear infection, perhaps? Not according to the vet. The head tilt came and went, and she was obviously uncomfortable, but it wasn’t until she started doing some “air scratching” that our hearts sank. And finally, when she was seven months old and couldn’t walk for more than a few minutes without obvious dysfunction, we took the video below to show the vet. It goes without saying that we were referred to a neurologist, had the MRI done and received the diagnosis, but there was a surprise as well.

My sincere thanks to GreenMan Video Productions for rescuing the footage from an old Hi8 cartridge. The video below shows you a bit of what Tori went through, but we didn’t record her reaction to sounds. The MRI showed that she has moderate hydrocephalus with temporal lobe atrophy, and it’s this atrophy that causes the hearing issue. Not a big deal in the grand scheme of things because this is all she’s ever known, but severe chiari malformation, Syringomyelia, and moderate hydrocephalus needed to be addressed with Prednisone. (Notice that she drank water at the end of a “bout” – almost always. I’ve worked with many Cavaliers who have this same reaction. Nobody seems to know why)

** You may or may not to be able to view this video if you’re using Internet Explorer. It seems to depend on your operating system and version of I.E. Patience is a virtue that’s sometimes rewarded when you wait for the video to download, but if not, please use another  browser in this case. Chrome works beautifully.

The largest doses of Prednisone came when Tori first had immune-mediated hemolytic anemia. It can be caused by tick-borne diseases (she tested negative to all of them), bee stings (nope, didn’t happen), ingestion of pennies (no), and some people say that vaccines can bring it on, but Tori hadn’t even completed her puppy vaccinations because of the other problems she’s been dealing with. So, she is considered to have primary IMHA and nobody knows what causes it. Still, when the immune system is attacking red blood cells and the dog is going to die, hard-core medications are used to suppress it, and high doses of pred top the list. She has had four relapses in four years, so more and more medications along the way.

Having been given all this pred for pretty much her entire life has left Tori with poor coat as compared to what it used to be, but it still looks pretty good except for the silly rat-tail. Her skin is prone to infections, and her urinary tract which has always been an issue (lots of UTIs ever since she was a pup) as well.  Long term use of steroids cause the dog to go through the avalanche of problems that dogs with Cushing’s have. The ones mentioned above are only the tip of the iceberg. Calcium oxalate bladder stones can lead to surgery for removal, and Tori is not a candidate for surgery. A low oxalate diet combined with a lot of water added to her food bowl has helped her to avoid this problem. Ensuring the diet is low in sodium is a must because sodium excretion amplifies calcium excretion which can lead to bladder stone troubles.

Her diet must be low in fat because Prednisone in conjunction with other medications (Atopica and Azathioprine) can cause problems for the pancreas, not to mention the liver. And speaking of the liver, her diet is never based on red meats, or even includes them as treats. Compromised liver function dictates that we don’t feed red meat if at all possible.

Finally, consideration is given to antioxidants because she does need them as any dog does, and due to her liver and heart (well, she is a Cavalier after all, so heart trouble is to be expected) they’re important. However, too much of a good thing can go bad when the immune system is in overdrive. Antioxidants are fed cautiously.

So, don’t despair if your dog needs medications for a long time. Find out which problems might be caused, and feed to avoid those problems as best possible. It beats losing the dog to a disease that can be managed with medications, harsh as they might be.