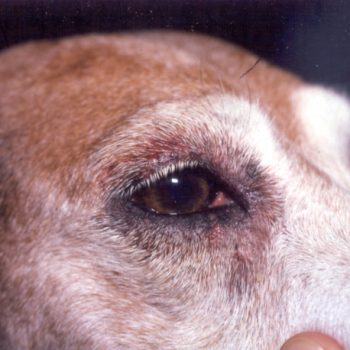 If I had to pick one thing that drives me batty about home-prepared diets, it’s the willy-nilly feeding promoted by certain book authors and chat groups. Don’t get me wrong. Feeding a varied diet can work well, but when it doesn’t, it’s usually just when you’re feeling pretty cocky about it. The dog can start to break down. And I do mean break down!

Feed a home-prepared diet that meets the recommended allowances for dogs (per the NRC), and this simply doesn’t happen. Here are some scenarios of how and why the willy-nilly method might look great as well as the how and why of the break down – followed by a story to explain my little rant:

Say you feed a chicken based diet. It’s low in zinc, but high in fat, so the dog’s skin looks pretty good. Next month, you feed a lot of beef, so the diet provides more zinc than before and the skin still looks great. Now, you feed pork, turkey, and so forth. Overall, the diet is deficient in zinc and unless you’ve been feeding some beef liver or a large amount of heart, it can be low in copper as well . In addition, B vitamins are low overall. Better some days, pretty poor on other days. Other than vitamin B-12 which circulates in the body for about one month, excess B vitamins are excreted in urine. So, if the dog did happen to have some excess Bs one day, s/he isn’t going to have them the next day, much less over time. All of the above (and much more!) are critical to skin health.

The reason that skin can look good and the dog might feel fine even when a diet is deficient is the same as it is for people. The body has mineral reserves (in the bones and liver, for example) and it draws on those reserves when diet doesn’t provide what’s needed. Not so bad, right? Especially for a dog that was previously fed a commercial diet to meet AAFCO guidelines because those diets are fortified. So, the dog has good mineral reserves, you switch to a home-prepared diet that lacks critical minerals and the dog looks fantastic. Even better than before! Yes, but that’s because the fresh food component can be wonderful and the body’s reserves are being drawn upon. If the dog is old enough, you may never see a problem because the dog passes away due to old age, so the mineral reserves were good enough to hide a problem. If the dog is younger, chances are the problem(s) will surface over time in the same way that some people think the diet will balance over time. Mineral reserves become less and less and the dog starts to have trouble. Once those reserves are gone, the dog is in very, very big trouble.

I received an email yesterday from someone who lost her eleven month old dog. This was a normal puppy with all the promise in the world. A happy, frisky boy with so much life ahead of him…and then it was over. He started having flaky skin, so the owner added nice oils to the diet. Then he broke a toe nail. Veterinary testing  could find nothing wrong. It was suggested that perhaps he needed to have his nails clipped more often or was running too hard on a surface that allowed him to slide. The dog began to yelp for no apparent reason. He had a seizure which he came out of nicely if such an occurrence can ever be considered “nice”. And then, out of the blue, he was simply walking through his backyard when he fell over and screamed. Turns out the femur had shattered. Further investigation showed ricketts and the rest is history. The veterinarian suspects that the pain was too much and the pup went into cardiac arrest. The diet, by the way, was based on a rotation of foods as was advised by people with good intentions on a chat list. I analyzed the diet today. It was deficient in B vitamins save for B3, deficient in vitamins D and E, magnesium, iron, zinc, manganese, potassium and iodine. The ratio of calcium to phosphorus was way off the mark.

Horrible as this was, I don’t want to leave you on a sad note because several months later, the person has a new dog and she knows better now. Rather than taking everything she hears and reads as gospel, she’s turned into a client, and it’s with encouragement and permission that I’ve shared the story. This isn’t about trying to make anyone fearful, so much as thoughtful about the roles of vitamins and minerals in general. Home-prepared diets (raw or cooked) can be fantastic (as my dog would tell you), but you can’t address what you don’t know, so here’s the deal:

An unbalanced diet can be the cause of less serious issues like itchy or flaky skin, but it can get worse if diet is at play and that’s my point. The first step is to see the vet, obviously. Nutritional causes of disease aren’t always recognized and healthy skin needs all vitamins, minerals, protein, fat and water to stay health. The roles of vitamins and minerals are vast and some are more specific to the skin. Keep in mind that even those that don’t seem to be, can be related to proper digestion, hormone regulation and metabolism which, in turn, matters to skin health.

The Roles of Vitamins and Minerals (from the K9Kitchen and Optimal Nutrition books):

Biotin: healthy skin, utilization of other B vitamins