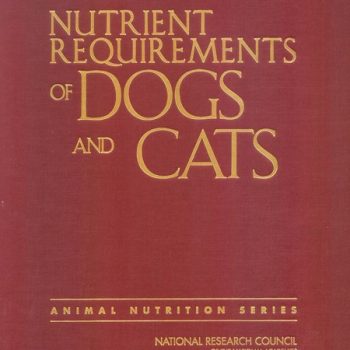 Pet parents are faced with varying points of view when they consider what a balanced diet for dogs should look like.  While the internet is undoubtedly a bonus most of the time, it is also rife with blogs, opinions on social media and ads that present some questionable ideas presented as facts. For example, the idea that the National Research Council (NRC) provided their guidelines based on arbitrary numbers. This is simply not factual.

The NRC committee is an ad hoc group (called upon as needed rather than being fully employed by the council) of independent scientists. While all of these scientists are distinguished, you’ll appreciate Quinton Rogers (Professor Emeritus Molecular Biosciences, UC Davis) as the person who wrote about the taurine requirement of the cat. How many pet cats were saved by that? This same level of knowledge and application is extended to the nutrient requirements of dogs when the ad hoc group puts their findings to paper, but that’s just part one!

The NRC published their minimum requirements for dogs in 1985 based on purified diets (purified sources of varying nutrients – eg casein as a source of protein) which use human food grade ingredients.

In 2006, NRC came out with their recommended allowances (a big step up from minimum requirements) but not before holding meetings for many months (close to 2 years) with veterinary specialists. This was a chance for dermatologists to give feedback on any issues they saw, for internal medicine specialists to speak up and so forth. Invaluable feedback and data gathering based on the reality on the ground rather than the lab. It took a long time to see the 2006 numbers in print. They came after painstaking study, investigation, and many meetings. Truthfully, human nutrition guidelines could learn a lot from this process. 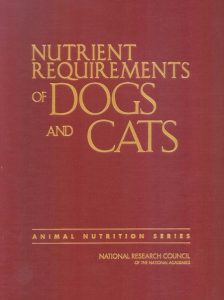 I had the good fortune to participate (long distance) at a meeting to voice some concerns about the various applications of the new numbers. Rather than being met with eye rolls, scientists agreed that application should be a major consideration. The various food components of the diet matter.

By using the NRC numbers as guideposts and by considering bioavailability of food sources as well as overall diet macronutrients (and other factors) we are able to formulate fresh food diets to meet a dog’s nutrient requirements.

Some folks say that the NRC 2006 numbers were sponsored by the pet food companies. Some say it was AAFCO. The fact is that the NRC numbers are not being used that way. Check out the Complete and Balanced statement on most food products and you’ll find it states “…is formulated to meet the nutritional levels established by the AAFCO Dog (or cat) Food Nutrient Profiles… ”

I listened to the discussions when the NRC first presented their numbers prior to publication and the argument from many in the field was that the numbers didn’t reflect the reality of commercial products. That’s a pretty good argument, right there! Meaning the NRC numbers are not suitable for commercial kibble diets because the ingredients are not fresh food but more “feed” with higher carbohydrate content for the extrusion process.