This is day 20 of Tori eating Hill’s Z/D and her itching is at least 75% resolved. There’s the possibility that it could be even better, but she happens to have a dad who shows his love by feeding her things that should be avoided right now. Cheese, bites of bread as well as the licking of a plate after he’s eaten most of the egg that was on it…you get the idea. Of course, this works against Tori’s best interest, but saying so gets me nowhere. So, I’m not sure how to resolve it, but I’m pretty darn sure food allergies were Tori’s major issue. Otherwise, Z/D wouldn’t have helped at all. This result is exactly what I’d hoped for – a period of eating a hydrolyzed diet to help make some sense of the multiple possibilities for her chronic itchiness. It’s come about faster than I’d expected – bonus!

That said, there’s no doubt in my mind that contact allergies are also playing a role. A few minutes of walking on grass and you can bet that Tori will chew her paws non-stop. That part isn’t difficult to control, though. Wash those paws off the minute she comes inside, and her reaction calms down dramatically.

The challenge: how to get Morley to stop feeding her anything other than her own food. If we can get to that point, we should be ready to implement a new diet within a month. Admittedly, I can hardly wait for that to happen. Although I’d leave Tori on Z/D if that was the only thing she could tolerate, I much prefer to feed fresh food…and so, I repeat the following to myself every day ” It’s about her, not me”…and much as I honestly do believe it and live it, this is tougher (emotionally) than I thought. It’s not that I’m emotionally attached to a certain feeding method so much as I can’t get over the fact that given what I do for a living, my own dog would be challenging a core belief in fresh food being healthier. Because it is healthier – unless you don’t tolerate it, and that’s the bottom line. 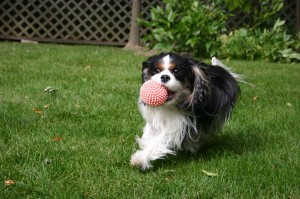 We’ll see how this plays out. In the meantime Tori’s bright red muzzle isn’t red any longer, and the hair in that area is growing in nicely. It’s hard to find fault in that!