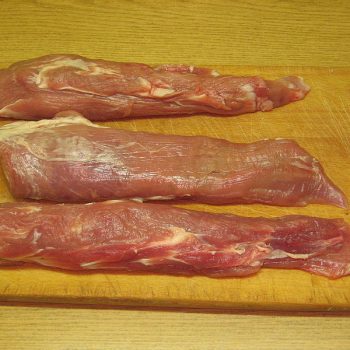 A myth, but one that circulates often. Some veterinarians give this directive as well. So, when did it become such a no-no to feed pork?

A very long time ago, and for valid reason (let’s just say it’s a myth with sort-of factual origins). Bacon drippings, bacon itself, fatty ham…all of these can be problematic for many dogs. And that’s what some people were feeding when their dog developed pancreatitis, colitis, etc. It’s not about the meat. It’s about the fat content. So, it seems that people made assumptions i.e. dog became sick when eating ham/bacon/fatty parts (pick one) = pork should never be fed to dogs; pork is hard to digest, and other such notions.

I have a number of clients with dogs that have serious GI problems. A novel protein source is often needed for these dogs and although pork can be a hidden ingredient in some commercial diets (think “animal protein”, “animal fat”, bone meal, gravy, etc), many of the dogs I work with have never eaten it before. Another consideration for these dogs is dietary fat content. Some can handle more  fat than others, but overall, a low-fat diet is key to keeping their GI tracts happy. So when I do use pork as the main (sometimes the only) meat source, it has to be a lean cut. Tenderloin (not to be confused with loin) can be a terrific option. That thin, long strip of meat with virtually no visible fat has saved many a dog! But you can’t skimp. Tenderloin is the most expensive cut of pork and you can find “loin” for less. That’s because loin is fattier, thus riskier for a dog with GI trouble.

Pork isn’t the most nutrient-dense meat around, but when you combine it with pork organ meats (not what most GI dogs tolerate, but it’s usually just fine for healthy dogs), you can put together a pretty good diet. I pair it with quinoa sometimes, because the combination works to provide good nutrient values, and the diet needs fewer supplements – always a good thing when you have a dog that can react to anything and everything.

For those who are concerned about animal welfare, you probably know that pigs are usually grown under less than humane conditions (I’m trying to be nice about the description), so you’ll want to investigate places that buy from farmers who grow free-range pigs. I hate to bring this up because the fact is that this makes the meat even more expensive. As the owner of a dog with so many food allergies that I want to pull my hair out, I know that sometimes we need to do what we need to do, so I’m certainly not judging. Tori has just started eating rabbit (the verdict on her tolerance of it isn’t in yet), so believe me when I say that I understand the dilemma…but do what you can if you can, and don’t think that pork is “bad” for your dog. A lean cut may just make the difference between having a sick pet and a healthy one.