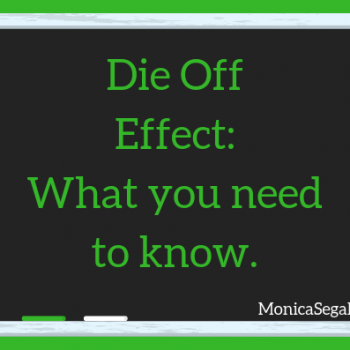 Die-off is a coined term for Jarisch-Herxheimer reaction. Simply put, it’s a reaction to the products that harmful bacteria release when they die during antibiotic treatment. So, when you took that antibiotic that killed the bad bacterial infection you suffered from, and then had diarrhea and blamed it on the antibiotic, you were probably right. But dietary changes – even those that are beneficial to the get – can cause loose stool, and we see the die-off effect for a different reason. Confusing to the observer even when we know the facts, but since dogs don’t come with zippers down their bellies (an unfortunate error in creation) we need to try and decipher what’s happening.

The gut environment with all of it’s microbes changes as the diet changes. A diet that’s higher in fat, or provides less or more carbs, protein et al prompts the gut to respond by changing the microbial population. These changes can cause stool problems and an upset stomach which is why introducing a new diet over a 5-7 day period (could be even longer for sensitive dogs) makes for an easier transition than doing it cold turkey. 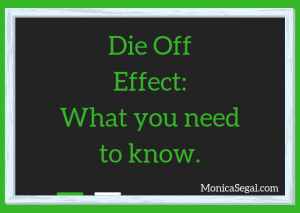 Say you take 7 days to change your dog’s diet from something off the shelf that’s primarily rice, corn and chicken meal to fresh chicken and sweet potato. Clearly you’ve made a better choice, but the dog’s stool has mucus in it. What now? Maybe the foods don’t agree with your dog, but maybe it’s the die-off effect. Before you have a chance to think about it, someone will tell you to add a probiotic and not just any probiotic. One with a whole bunch of different organisms in it to cover all bases. Someone else will tell you to use slippery elm and another will chime in about sweet potatoes feeding yeast (not true, folks!)  and that yeast is the reason for the entire problem. Somewhere along the way there will be a heated debate about raw vs. cooked foods and dogs benefitting, or not benefitting from vegetables. If you wait for everyone to calm down (it’ll take a few days) your dog may have good stool by then. If so, you were probably seeing the die-off effect as the gut environment changed.

How do you know if it’s die-off or not? Die-off shouldn’t take very long. In most cases 3-4 days and stool improves. The dog isn’t acting ill. There may be a little mucus in the stool – not massive amounts. There is no blood. The dog doesn’t vomit. The skin won’t be yellow; there is no fever. Stool will firm up a bit more each day.

I don’t like to throw the term die-off-effect around very much because frankly, it’s been blamed for things that aren’t likely to be die-off. Be watchful and careful.

Our diets are implemented in tiny steps for many reasons, not least of which are the ones above. The die-off effect is real. There are many nuances and you need to slow down and try to understand what’s happening.