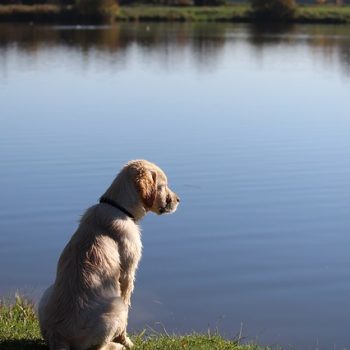 I work with a lot of dogs that have gastrointestinal (GI) trouble. IBD, colitis, you name and it and I’ve probably consulted on it, but more than this, I have a 20+ year history of my own dogs with GI troubles. Someone once joked that it was if I had a sign on my forehead that read “All GI dogs welcomed here”, and it seemed true. Maybe those dogs were sent to me so they could teach me about the disease processes and what we can do about them, or maybe I just need to fabricate some reason for my own musings, but two things are true: The dogs suffer and the owner suffers right along with them.

A common problem with these dogs is that so many of them seem to have a type A personality. Not only can they be stressed out a lot of the time, but they seem to have a drive that pushes them to do more, do it faster, do it on their own terms.  Even those who aren’t quite like that seem to have a temperament that makes them “different” from the dog who’s more laid back. They can be scared of many things, or so over the top in their reactions to joyful situations that it makes you wonder if there might be a connection between the mind and the body. It’s true in people, and I suspect that dog owners think it’s true of dogs. We may be different species, but emotions are emotions and my guess is that the human world with all it’s noises and activity is pretty strange to dogs.

A study in Greyhounds shows that White Coat Syndrome exists in this breed and judging by the way so many dogs react in hospital settings, I have to wonder if most/all dogs go through the same thing. If so, the body-mind connection in dogs might be scientifically proven once and for all, but most of us (dog owners) knew it all along. So what can we do about this when it comes to helping our dogs? There are medications that might help to calm a dog down, but most people cringe at the thought because they envision a doped-up dog who can barely move. Then there’s a more natural route via bioactive milk peptides. People seem to need a lower dose, so a veterinary behaviorist can prescribe something more suitable for pets. The product is called Zylkène and it’s hypoallergenic. If you’ve tried giving your dog milk peptides for people and found them not to help, don’t rule out the veterinary version just yet. I’ve seen some good results with client’s dogs.

The rest of the story involves adjusting our attitudes. A dog that has horrible stool every time he’s in an agility trial is trying to tell us something.  Maybe you got him exactly because you enjoy agility, and maybe he seems to love the sport, but if his gut is in turmoil just before, during, or after every “fun” day, his health is suffering.

The dog that can’t wait to go for a run in the park, but eats everything he can find and has an explosive gut is better off on a leash and perhaps using a muzzle can be helpful. No, muzzles aren’t cruel. What’s cruel is having a sick dog and not attempting to stop behaviors that make him sick in the first place. I’ve seen dogs who couldn’t wait to get their muzzles on because it meant they were going out! You can train a dog to really look forward to the muzzle.

Our Tori doesn’t have a GI problem (knocking a log cabin!), but she’s taught me to respect her emotions. She hates going for a walk and hates parks. Strange, I know, and I couldn’t believe it. No matter how much we exposed her to the world when she was a puppy, she simply detested going out. Maybe she’s agoraphobic (I’m kidding, but who knows?) In any case, it finally dawned on me that she was perfectly happy when walking and playing in the backyard. Just because I wanted her to have a good time in the park or on a walk didn’t mean that she was. Neither did it mean that I had to win this battle because in reality, it’s not a battle at all. Providing what makes her happy and not pushing her into situations that she hates keeps her on a better emotional level. It’s not a big deal. The same is true for dogs with GI problems. Observing the dog’s true self rather than deciding what they should be can bring better results.