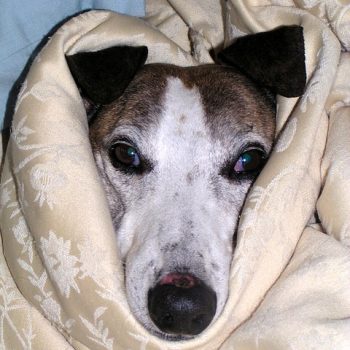 If the weekly questions in my in-box are any indication, there’s a lot of confusion out there about diets for liver disease. Here are some facts that can help you sort things out. I’ll try to keep it simple.

There’s more than one reason for a dog’s liver enzymes being high (blood test results panic a lot of dog owners). Just because enzymes are elevated doesn’t mean the dog has a liver disease. It might be the case, but it’s not a given. Sometimes enzymes go back down on their own without any dietary changes, and sometimes even without medical intervention. There are speculations as to why this happens to one dog and not another, but your best bet is to stay calm, listen to your veterinarian and don’t start throwing all kinds of supplements into the dog out of panic.

Some dogs with a genetic abnormality store excessive amounts of copper in their livers. This is called copper storage disease and can also be secondary to liver disease in general. I’m seeing more and more people trying to restrict dietary copper the minute their dog’s blood test results show elevated liver enzymes. This can be a serious mistake for two reasons. First, you can’t know the dog is storing too much copper unless a biopsy result confirms it, so restricting copper risks the dog developing anemia, and can affect the immune system as well. Secondly, even in the case of copper storage disease, it’s not clear if the stored copper is actually available to be used by the body, so the dog needs to be monitored by the vet to see if anemia develops.

In hepatic encephalopathy (HE) the liver has trouble removing the normal byproducts of digestion from circulation. Since the breakdown of protein is ammonia, a diet low in protein can be very effective. The quality of protein matters, so eggs, milk products make a very good base to build a diet on.  Red meats shouldn’t be fed at all. Here’s the glitch: malnutrition is possible when dietary protein is restricted by too much, and yet dietary protein is a problem for these dogs. General guideline: 1 gram of protein per pound of bodyweight. Remember this is not 1 gram of food, but rather, the protein amount in that food. This makes for a good start, but protein is usually increased slowly once symptoms are under control. I find that 2 grams of protein per pound of bodyweight is where most dogs do well, although some can handle as much as 3 gr/pound bodyweight. Why not leave the diet at the least amount of protein possible? Because in most cases, the liver of a dog with HE has trouble utilizing protein, so it actually needs more of it rather than less. So, once the dog shows no symptoms (spacey look, lethargic, seizures), dietary protein is increased.

In the case of a diagnosis of liver failure/liver disease absent of the issues above, there are benefits from supplementation with vitamins C, E, (I’ve used CoQ10 as well), taurine, milk thistle and SAMe (I use Denamarin for my own dog). Dietary protein is not restricted. Depending on what the original diet is, protein might be increased instead.