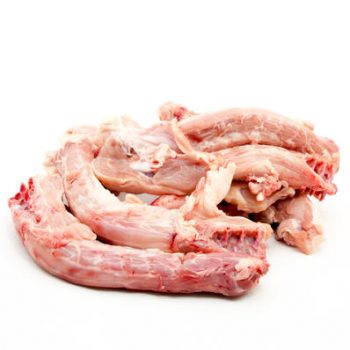 Hyperthyroidism isn’t rare in cats, but it’s very rare in dogs. In fact, when the test results show canine hyperthyroidism, the conversation turns to the possibility of lab error, or thyroid carcinoma and everyone scrambles to find answers quickly.

In all my years of working with dogs, I’d never seen a case of hyperthyroidism until recently. The dog was eating a raw diet that included turkey neck and ground beef. I should point out that this was high-quality, federally inspected meat rather than meat purchased from a local farmer who butchered his/her own. This is something to keep in mind as you read this study which concludes:

“Dietary hyperthyroidism can be seen in dogs on a raw meat diet or fed fresh or dried gullets (which include thyroid tissue). High circulating T4 concentration in a dog, either with or without signs of hyperthyroidism, should prompt the veterinarian to obtain a thorough dietary history.”

The dog in question is eating kibble at the moment. Thyroid test results have improved and we look forward to seeing normal results within a few more weeks. At that point, we can review the situation and consider whether a cooked diet might be a good option in this particular case. The fact that hyperthyroidism can happen on a raw meat diet doesn’t mean that it’s considered a normal occurrence and can be ignored. The heart can race to dangerous levels, the dog usually pants heavily due to rapid breathing or difficulty breathing, becoming hyperactive, and many other symptoms.