Tori has multiple health problems and three of them can cause her to mutilate her muzzle, ears, paws, neck, bum, and do some hobbling while she air-scratches. The most concerning is  Syringomyelia (SM) which can cause her to roll around and scratch like a fiend. The second is that that she has environmental allergies, and third is food allergies. Because all three cause her to scratch frantically, it’s anyone’s guess as to why she does it at any given time. Trial and error brought a fresh food diet for her. She tolerated fish (cod and tilapia only), eggs, carrots and rice. This has been her diet for more than one year and she was doing beautifully. But this past month has been hellish for her.

We took her to a dermatologist 2 1/2 years ago. Shampoo therapy (two Rx shampoos twice weekly) along with skin moisturisers and barriers were magical. She found tremendous relief after just one visit with this remarkable vet. But the protocol hasn’t helped during this last month. So, is she reacting to the season, the food, SM, or two or three of these things? I can’t put her in a bubble to find out, so something had to give. Tori is, as I write this, being weaned to Hill’s z/d ULTRA (canned, because I want to avoid the possibility of storage mites) 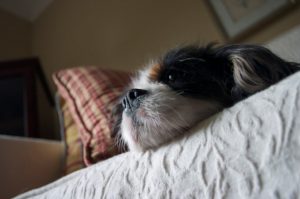 Imagine…me! – feeding a commercial diet. Do I want to? No. Do I like it? Heck no! But I want to be honest about what I’m doing because much as I believe whole heartedly that a home-prepared diet is best, Tori comes first. This isn’t, and shouldn’t be about my personal preference. My plan is to keep her on z/d in hope she finds some relief, but also because it helps me point to food allergies as the culprit for her current problem if indeed z/d helps her. At that point, I’ll challenge her with one fresh food at a time until the picture becomes clearer.

The benefit of feeding a hydrolized diet is that chances of a negative reaction to the food are next to nill. It can happen, but not nearly as often as when feeding whole proteins. In this way, it becomes a stop-gap measure that’s more likely to bring success over the long term as I introduce foods. I’ve done this before and z/d helped, but Tori developed calcium oxalate crystals and a tiny stone which she, thankfully, passed on her own. So, we can’t stay with z/d for long, but I’m flooding her water bowl to flush crystals out and we’re keeping fingers crossed. The food in and of itself may not be to blame, by the way. Tori must take prednisone daily due to the SM, and pred disposes to calcium oxalate problems in the first place. But she never developed this problem when eating a home-made diet, so that’s what we need to get back to.

I talk to clients about these bleeps on the radar screen and a need to take a step back sometimes. I’m now doing it for my own dog as well. I’ve been told that the suggestion is tantamount to feeding poison (seriously? – I think not) and that I don’t love dogs. But, you know, it’s exactly because I do love them that I think we need to do what can help the dog over the long term. Fresh food can be tantamount to torturing the dog if that dog happens to to be a highly allergic animal. Tori’s mom was put down when she was just 5 1/2 years old because her life had become unbearable as she scratched until she bled. She wasn’t checked for SM, so we’ll never know if it was that, or allergies. Tori’s 5 years old now, and she will not have her mom’s fate because we refuse to let it happen. One way or another, we’ll get to the bottom of this and fix it. If that means feeding z/d for now, so be it. Here’s hoping this works for Tori. I’ll keep you posted. Maybe this experience can help someone  to help their own dog.