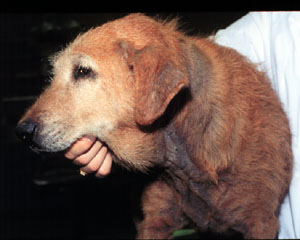 Although we may think that the body lives alone, it actually shares itself with many organisms including yeasts. The type that’s most common in dogs is called Malassezia and it exists happily on skin without causing a problem unless something happens to create  havoc, giving the yeast the opportunity to overgrow. For example, an allergic flare-up is a fairly common cause. An allergy to what though? It could be to a food, or something in the environment. It can also be due to a hormone imbalance, or an immune deficiency (veterinarians can test for this) and if the dog happens to have excessive oil production of the skin (seborrhea), s/he is predisposed to yeast overgrowth to begin with. So, how do you know the problem is yeast?

First, step away from all the chatter on internet lists and search engines results. See the veterinarian who can take swabs, cultures et al. A dermatologist can be your best friend in this case because sometimes the assumption of a yeast infection is made without checking to see if the infection has occurred secondary to a bacterial infection. In that case, the bacteria should be treated! I’ve had clients with dogs who were treated for yeast infections only, and the end result wasn’t pretty. Due to no competition form the yeast, the bacteria does a happy dance and flourishes. Now the dog is even more itchy, scratches furiously encouraging bacteria and yeast to spread.

Interestingly, and infuriating as it may be, a dog can become allergic to the yeast on his/her own body. There are tests for this too, so keep it in mind as your vet investigates possible causes.

From a dietary perspective, yeast overgrowth due to food allergy won’t be cured by elimination of  any particular foods (no, not even carbohydrates and/or grains despite what you may have heard or read elsewhere) other than ones which the dog is actually allergic to. That allergy may indeed be to a certain carb, but could just as easily be to a meat source or a supplement. My approach for clients with dogs that have yeast overgrowths is to:

b) add acidophilus as a helpful probiotic

c) balance the diet once symptoms have calmed down

d) provide suggestions for more natural ways to calm the skin down i.e. witch hazel on a cotton ball for swabbing the ears; foot soaks of 2 quarts warm water to 1/2 cup hydrogen peroxide (and 3/4 cup regular white vinegar if you are certain the paws are not raw — vinegar stings badly in that case)

e) use a bath rinse of 1 gallon warm water and 1 cup vinegar for those dogs with seasonal (usually during summer months) yeast problems to keep the skin fresh and provide a more acidic environment which yeasts don’t like (overdo this rinse and the dog may have dry skin, so keep to an individually appropriate regime)